Rancid's Royal Fair is the name of a series of extra episodes of Farm Heroes Saga. These events are only available for a limited time and only on the mobile version. The first episode was released on September 14, 2016. This series is similar to the Treasure Mill event.

How make this workEdit

Match Cropsies and turn the board to Clovers!

Earn one point per Clover after every move

Rancid turns the board to Concrete! Stop him!

Robo Rancid will take over territory surrounding him. Match next to Robo Rancid to defeat him!

Robo Rancid in the game

Coverage bonus counting after the last move in Level 1

Get bonus points in Level 3

When you won a Level

The player starts the game

Rancid starts the game
Add a photo to this gallery

Introduction of Episode 1 released on September 14, 2016

Level 5
Add a photo to this gallery

1 Level left
Add a photo to this gallery

Gold Bars will pile up during your reign 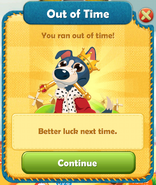 Rancid's Back after your received prizes
Add a photo to this gallery
Retrieved from "https://farm-heroes-saga.fandom.com/wiki/Rancid%27s_Royal_Fair?oldid=32213"
Community content is available under CC-BY-SA unless otherwise noted.