Sheep is one of the elements and collectibles in Farm Heroes Saga.

On some levels, you are engaged as a shepherd and have to guide some sheep onto a square of hay. Make a match next to a sheep to move it forward to the square of the switch. It is possible to move more than one sheep with a single match. All kind of subsequent matches will not move the sheep. Neither will a shovel or matches caused by a shovel. Frozen cropsies when matched don't have any effect.

Normal sheep are prior to moving firstly to a square of the switch if both kinds of sheep are made a match next, and then it is black sheep turn. 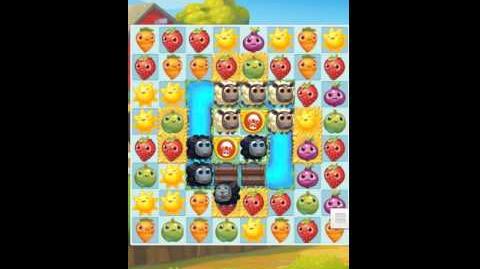 Retrieved from "https://farm-heroes-saga.fandom.com/wiki/Sheep?oldid=38196"
Community content is available under CC-BY-SA unless otherwise noted.